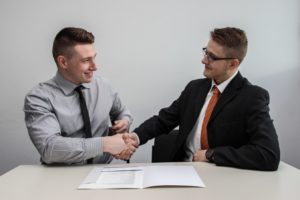 Best practice any time you enter into a business-related agreement is to put it in writing. This not only ensures there is no misunderstanding between the parties, but provides a multitude of benefits in the event of a dispute because it gives each party certain rights and remedies under the law. Generally, a contract must be signed in order to take full advantage of having a written contract. However, there are instances where an unsigned agreement can still be enforced.

In New York, a valid contract must have 3 elements: an offer, acceptance of the offer, and consideration (an exchange of benefits). While generally contracts may be written or oral, the New York “Statute of Frauds” provides that certain contracts must be in writing to be enforceable. Some examples include contracts which:

A contract must contain certain terms to satisfy the Statute of Frauds, such as identifying the parties, describing the subject matter, and stating all the essential terms.

Where a contract is in writing, generally, it must be signed by the party against whom the contract is being enforced. If there is no signature, then it may be argued that there was no acceptance of the offer so there is no contract. However, signatures may not be required if there is evidence supporting a finding of the parties’ intent to be bound. In other words, if the party seeking enforcement can produce other proof that the parties did have an agreement on the terms, then the agreement can be enforced unless the other side can show that the parties agreed that the contract should not be binding until it was formally signed.

A party seeking to enforce an unsigned agreement may also have a claim for unjust enrichment or promissory estoppel. The elements of an unjust enrichment claim are that one party was enriched at the other party’s expense and it is against equity and good conscience to permit the first party to retain what the second party seeks to recover. A claim of promissory estoppel requires a clear and unambiguous promise, reasonable and foreseeable reliance on that promise, and injury to the relying party as a result of the reliance. Note that both of these legal arguments are very fact-sensitive and can be difficult to establish in a court of law.

The takeaway for those entering into business-related agreements is not to hope that a court will rule in your favor because you didn’t follow legal requirements. Consult an attorney to prepare a written agreement and execute it properly.

2020 EMPLOYMENT LAW UPDATE: RECENT CHANGES TO NEW YORK LAWS THAT AFFECT EMPLOYERS6 ESTATE PLANNING MISTAKES AND HOW TO AVOID THEM

GOT A KID GOING TO COLLEGE?

BEYOND THE LOT (JULY 2022): THE FTC’S PROPOSED DEALER ADVERTISING RULES